No Result
View All Result

No Result
View All Result

by Admin
in Featured
0

154
SHARES
1.9k
VIEWS
Share on FacebookShare on TwitterShare on WhatsApp

A photo of a nun who seems to be pregnant has been making rounds on social media for the better part of the day. However, new information has emerged clarifying what could be up with the nun.

The Archidiocèse de Yaoundé through a statement on Facebook noted the shock by the publications about the nun and asked the Lord for healing.

When perversion invades the world, there is no longer any place where satire and foul speech do not pass…
To all of us who are shocked by the indecent publications about the sister, may the Lord give us the to stand up to the evil one and grant healing to the sister. 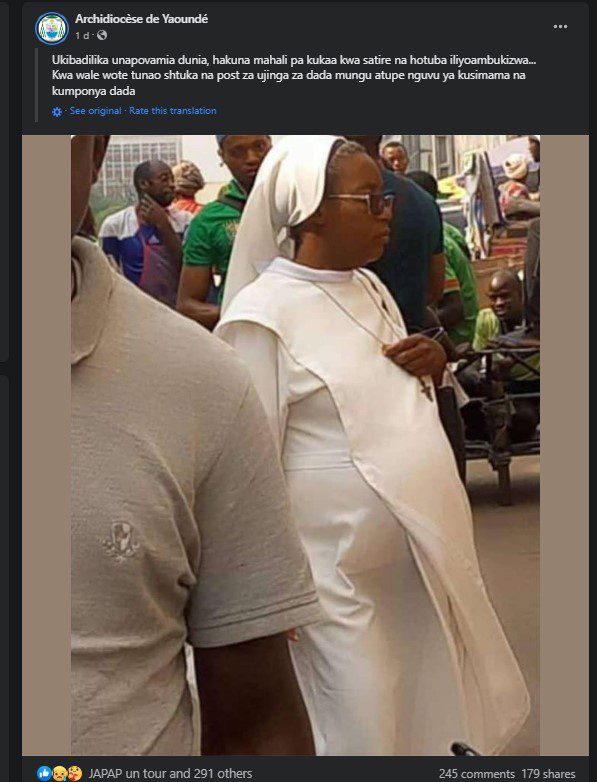 The post however did not disclose the condition the nun is suffering from.

What is the difference between a catholic nun and a Catholic sister?

A Catholic nun is a woman who lives a contemplative life in a monastery which is usually cloistered (or enclosed) or semi-cloistered. Her ministry and prayer life are centred within and around the monastery for the good of the world. She professes the perpetual solemn vows of living a life according to the evangelical counsels of poverty, celibacy, and obedience. Check out the Carmelite Nuns of Baltimore for example.

A Catholic sister is a woman who lives, ministers, and prays within the world. A sister’s life is often called “active” or “apostolic” because she is engaged in the works of mercy and other ministries that take the Gospel to others where they are. She professes perpetual simple vows to live a life according to the evangelical counsels of poverty, celibacy, and obedience. Check out the IHM Sisters of Monroe, Michigan for example.

Kenya: Boost to the health workforce as over 15,000 students graduate

Tesla’s Burning Through Nearly Half a Million Dollars Every Hour

Tesla’s Burning Through Nearly Half a Million Dollars Every Hour

Absa kicks off a food donation drive in Kenya

How NASA technology can help save the world’s largest shark

Here is why you should save your money in a SACCO